Kassou Concept Wishes It Could Fly 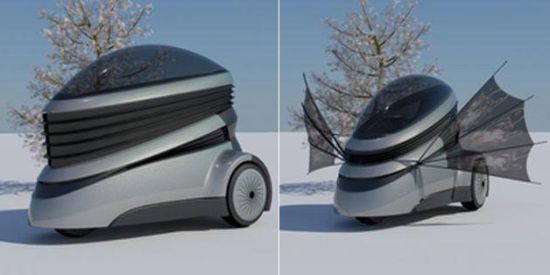 What in the blue fuck is this thing? The strangest looking compact three wheel concept car we’ve ever seen, even stranger than the Cerva MC08. It’s called the Kassou, which means “glide” in Japanese and it’s from designer Britisher Dunderdale. It came in second place at the Car Design News Contest 2008, most likely due to it’s unique flexible rubber neck that is capable of extending the driver seat for improved aerodynamics or increased inside headroom. A side-car could also be attached providing an extra storage for bags and even bikes.

Dunderdale’s design scored the highest for “unique and appealing design” within the professional designer category, but what’s the deal with the wings? It can’t glide or fly, so what’s the point? It wishes it could fly higher than Rick James and that Maverick Solo Jet, but that’s not happening with wings like that.