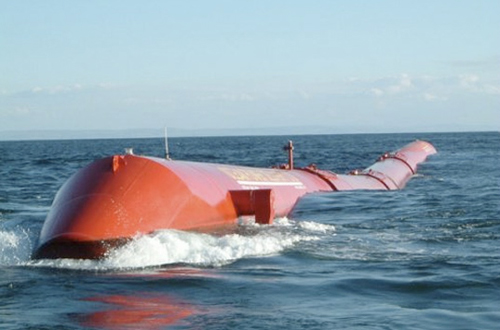 The world’s first ever wave farm went live at the end of September in Agucadoura, off the coast of northern Portugal. Three wave energy converters resembling Soviet submarines generate electricity with hydraulic rams driven by waves. The farm was designed by Pelamis Wave Power, which hopes to increase the farms productivity by adding an additional 25 wave energy converters that could potentially power 15,000 homes.

Waves powering homes? Remarkable, but how does it work?

The “Soviet submarines” are

tethered to the ocean floor by cables and are pointed perpendicular to the coastline. Each device is composed of several sections connected with articulated joints. As the waves roll in past the device, each section is driven up and down, while the hydraulic rams inside resist the motion. This resistance pumps high pressure fluid through hydraulic motors, which drive electric generators, thereby producing electricity. This electricity is then transmitted via underwater cables to the mainland.

Now, if the cables just so happened to be severed by an outside force, this could be a new found way to go fishing. I call it: shock fishing.