Snowl: Mozilla’s Take On Messaging In Your Browser

Is there anything Mozilla doesn’t create that facilitates your web surfing experience? Firefox 3 came out back in June, yet Mozilla is still working hard to provide its users with top end interactivity for its interweb softwares. Now, Mozilla wants to take its browser to the next level with instant messaging integrated into your web browsing. It’s called Snowl, that’s Snow and Owl combined for the less observant. Mozilla Labs lists a few key ideas behind their design phase:

As of now, Snowl is still in its prototype phase but is free to download at the link provided below. It supports two sources of messages: RSS/Atom feeds and Twitter. No word on whether or not Ogio will make a Snowl backpack. If they did, I’d rock it. Hit the jump for more information:

Being in its early phase of development Mozilla Labs has listed considerations for Snowl: 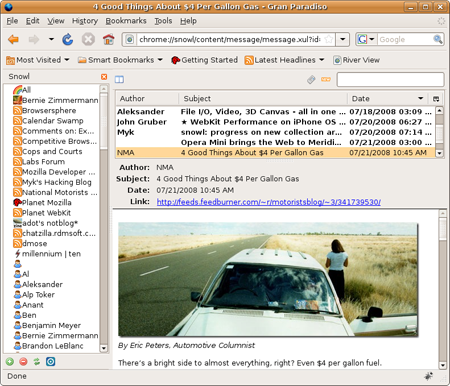