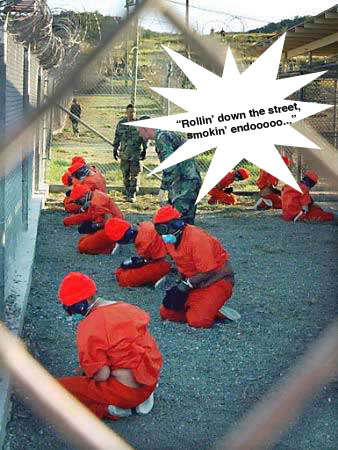 So here’s the deal: since 2003, the US Army has been effectively torturing detainees at Guantanamo with scare tactics and other jazz. One of the tactics is to blast music and rock and roll at prisoners “to create fear, disorient … and prolong capture shock.” Everything was peachy keen until this year, when several musicians teamed up to protest the treatment of prisoners at Guantanamo Bay. Artists like Massive Attack and Tom Morello are trying to create awareness for this issue.

One prisoner says he to listen to Dr. Dre and Eminem for 20 days.. Listening to rap for a few weeks doesn’t sound too bad to me. For Ryan, it’d most certainly be torture.