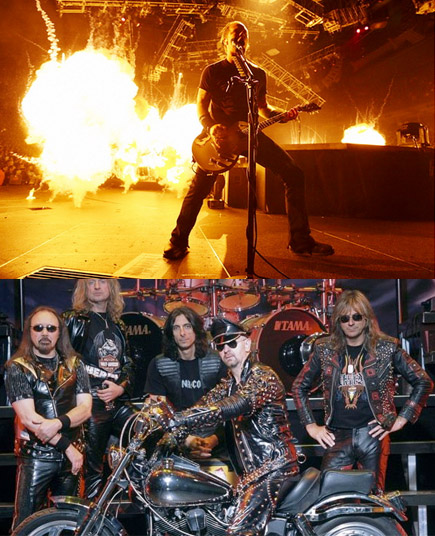 It’s Friday and you know what that means: Ryan is menstruating again.

We’re currently locked in a heated battle over IM on who reigns supreme in the world of music: Metallica or Judas Priest. It all started when I told Ryan that anything Metallica did in the 1980s was harder than Judas Priest or any other band, including but not limited to, Iron Maiden. I’m talking about some heavy shit here. We’re talking albums like Master of Puppets, …and Justice for All and Ride The Lightning. Chugging guitars, pounding drums and James Hetfield belting out rough vocals at metal fans across the globe. Their fucking name is Metallica, for crying out loud!

Now Ryan’s argument. He says: “While Metallica’s band members were still feuding over who would play bass in their high school battle of the bands, Judas Priest had already begun touring across England in the early ’70s. Vince seems to think that due to Rob Halford’s sexual orientation, Judas Priest is incapable of rocking hard (Not true!) Clearly he’s missed out on such songs as Blood Red Skies and Beyond The Realms of Death. It was the ’80s which brought Judas into the mainstream, but the late ’70s is when they truly shined. Metallica’s Lars was busy crying about Napster and the music industry while Judas was winning a lawsuit over a fan who thought that Judas’ metal was so rockin‘ that the music was asking him to literally go ‘Beyond The Realms Of Death’.”

Whatever. Our points have been made. After the jump, a music video for Metallica’s “For Whom The Bell Tolls” and a video for Judas Priest’s “So and So.” Watch them both and then leave us a comment, letting us know who’s better. This one is your call.

Who rocks harder? Let us know in the comments.