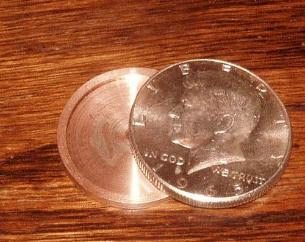 In the days of the Cold War, espionage was a big deal. This was back when spy bots didn’t exist and spies relied on obtaining information personally. If you weren’t a spy, you might as well have swallowed cyanide because during the Cold War everyone was a spy. That’s why Brian Dereu wants to cash in on spy-wannabes everywhere. He’s started a new business selling hollow spy coins for 20 bucks a pop.

It’s a coin that’s been hollowed out so you can covertly transport secret messages, suicide poisons, microfilms and maybe even drugs. Hell, if you’re dropping a twenty dollar bill on nothing more than a coin, you’ll have to do some smuggling with it to make up for your loss.