Wolfenflickr 3-D Combines The Best Of Both Worlds 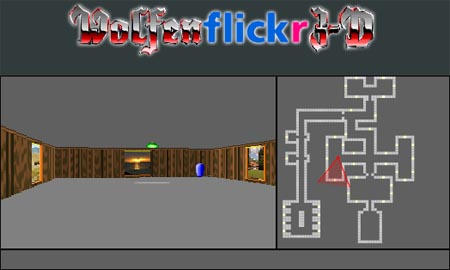 When Wolfenstein 3-D and Flickr wanted to get married, I gave them my best wishes. Just kidding, software and photo sharing sites can’t get married, silly. They can, however, be fused. Thanks to some anonymous geek with Javascript skills, this mashup of the popular FPS shooter game and photo sharing site takes the best from both and allows users to see their pictures hanging in the galleries of the Third Reich. That’s actually kind of creepy, now that I think about it.

It’s simple to use: just enter your Flickr username and let the app collect your photos. It then maps them on to the walls of a 3-D maze resembling Castle Wolfenstein. Awesome concept but it performs rather sluggishly when high res photos are taken into account, or if you just have a slow computer. Hey, it beats having Nazi propaganda on the walls.