The Cat Organ: The Most Bizarre Musical Instrument You’ve Ever Seen 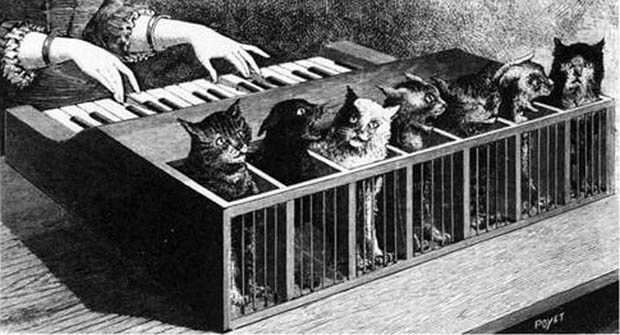 The cat organ, also known by its German name Katzenklavier, was a piano-like instrument that replaced the hammering of the traditional percussion piano with a line of cats fixed in place, their tails attached under a keyboard. Every time a key was pressed, a corresponding cat’s tail was yanked, making the unprepared feline shriek out in pain. The cats would be arranged according to the natural tone of their voices. We’ve posted about some odd forms of animal cruelty in the past, but this has them all beat, and is easily the least arousing.

While the cat organ was mostly a product of pre-16th century “musical” numbers, we doubt it was ever widely used or admired for its tonal beauty. One thing is for sure, Keyboard Cat, and likely all of his other LOLbuddies, would certainly not approve.