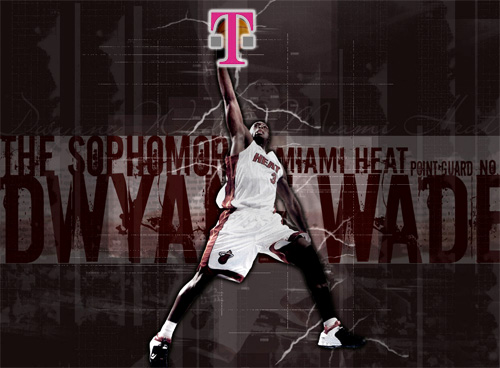 I’m not a huge basketball fan (NFL 4 LIFE) but I know a good player when I see one. Dwayne Wade? Yeah, I guess he’s OK. You know, he’s only like the fucking master of the universe when it comes to dunking. That’s why anyone stepping within 1000 feet of the Eastern Conference finals is going batshit right now.

And speaking of going batshit nuts, did I mention you can play HORSE against Wade for a chance to win $50,000? T-Mobile has the big bucks from G1 sales and is more than willing to pay up if you beat him. Better step your game up, kid, ’cause you’re going to need it.

All the details and then some after the jump! Get it? Jump?

T-Mobile myFaves Shot of a Lifetime:
T-Mobile will give one lucky fan a chance to play HORSE against Dwyane Wade during the Eastern Conference finals. If he/she is able to beat Dwyane, they will receive $50,000! Registration for the sweepstakes opens Wednesday – consumers can enter by text message – and starting March 4th, consumers will have another option for registration by visiting www.t-mobile.com/nba, which will also host instant-win prizes.

New T-Mobile advertising:
Also beginning Friday, T-Mobile will be airing a brand new ad which will include Dwight Howard and other “All-Star Faves.” Please let me know if you are interested in knowing when and where it will air. A link to the spot can be found here:
http://www.youtube.com/tmobile

Jam Session and T-Mobile wallscape:
Other T-Mobile activities during All-Star Weekend include the NBA Jam Session where fans can participate in an interactive basketball theme park or watch an NBA player teach in a coaching clinic. In addition, anyone in Phoenix right now is likely to see the large wallscape on the exterior of the Bank of America building outside of the Arena hosting
T-Mobile’s own “All-Star Faves” — Dwight Howard, Yao Ming and Dwyane Wade.

T-Mobile Rookie Challenge & Youth Jam game:
For the third year in a row, the T-Mobile Rookie Challenge game will take place this Friday, kicking off NBA All-Star Weekend. T-Mobile has teamed with the NBA and NBA Cares to create an amazing opportunity for more than 3500 students to experience NBA All-Star. By successfully completing fitness, nutrition, and community service requirements, the
“T-Mobile Stick Together All-Stars,” ages 11-15, from participating school districts will watch the game from the best seats in the house at US Airways Arena. Also, for the first time in the game’s history, two All-Star starters, Dwight Howard of the Orlando Magic and Dwyane Wade of the Miami Heat, both T-Mobile’s “All-Star Faves,” will serve on the Rookie Challenge & Youth Jam coaching staffs — Howard for the Sophomores and Wade for the Rookies.