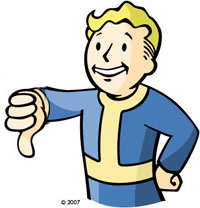 Fallout 3 is about to hit Japan’s store shelves and news has emerged claiming that the developers, Bethesda Softworks, have made changes to the game to more comfortably appeal to the Japanese market. You can probably guess from here what changes have been made, but just in case your a little rusty on your history, I’ll tell you.

Pretty much any reference to an atomic bomb in the game has been altered in some way. This includes the side-quest known as The Power of the Atom, which has you either disarming or detonating an atom bomb in one of the starting cities. The option of detonating the nuclear bomb has been removed altogether, along with the NPC named Mr. Burke who gives you the evil side of the quest. Even the mini-nuke launcher called the “Fat Man,” will be seeing some change. Hardcore Japanese gamers are already showing their disappointment and the game isn’t even out until December. So much for being discrete about it.