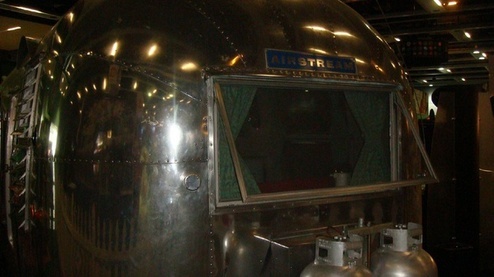 One of the more interesting booths on the Penny Arcade Expo show floor was Bethesda’s Fallout 3 homage. An Airstream motor home on a patch of faux grass decorated the center of Bethesda’s show room floor, along with a central booth filled with mannequins modeled after playable characters in the game. The Airstream motor home was completely gutted and refitted with a wonderful blend of retro Fallout 3-era memorabilia.

Originally, the plan was to donate the trailer to PAX. Now Bethesda has decided to donate the Airstream to Child’s Play following the game’s release. One lucky child will be sitting in this electric-powered motor home, drinking a six back of Nuka-Cola while launching mini-nukes at an army of chain gun-wielding mutants.