Fake Beer For Your iPhone 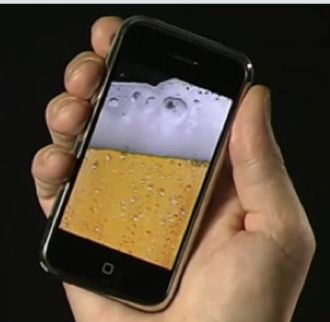 High tech gadgets and beer are both great, so you’d think that bringing the two together would be a smashing success right? Not true. Apparently, software developers don’t realize that the best part of drinking is actually getting drunk and you can’t get smashed just by looking at pictures of beer. First, there was the horrendous “Beer Pong” game for the Nintendo Wii. We all saw how well that went. Now, there’s iBeer, which brings all the non-fun of looking at an alcoholic beverage without actually drinking it to the iPhone 3G.

iBeer gives users to have a beer screensaver on their phones. It makes burping and fizzing noises and simulates being poured. With iBeer, you can tilt your iPhone and make it look like you’re actually drinking a beer. iBeer claims to offer users the opportunity to “brew and drink beer on your iPhone and iPod Touch.” Lame. This fake phone beer costs $2.99 at the iTunes store and, so far, the reviews for iBeer have been merciless.

iTunes shoppers gave iBeer a rating of one-and-a-half out of a possible five stars. Ouch. Reviewers left angry comments like “don’t waste your beer money,” and “runs slow not very realistic.” Despite the overwhelmingly negative response Hottrix, the developers of iBeer, are probably laughing all the way to the bank. One week after the iPhone 3G launch buying frenzy, iBeer is the sixth top seller in the iTunes App Store. That’s a whole lot of fake brew.