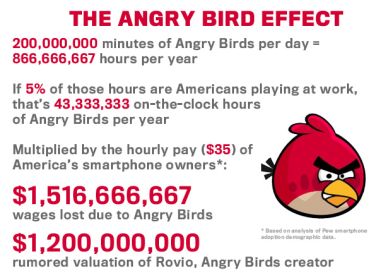 Love it or hate it, Angry Birds is a fiendishly addictive, unbearable cute time-sink that has captured the attention of millions of people all over the world.

According to recent data, Americans supposedly play a combined 200 million minutes of Angry Birds every day. A study decided to examine how much productivity (read — money) is lost every year due to Angry Birds. Here’s how the data breaks down.

Since the average smartphone owner makes $35 an hour (Oh, really?), that means companies lose $1.5 billion dollars worth of productivity hours by their employees playing Angry Birds.

With that data, we’re left with this question — do people really spend 5% of their time at work playing Angry Birds?