Sure, there are plenty of people who criticize kids playing video games but there is something to be said for the many benefits of educational games for children and now ZowPow are making game play easier for less dextrous hands. 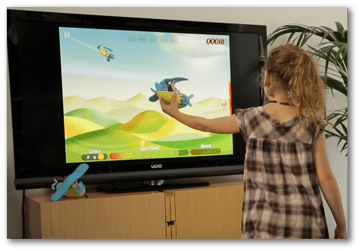 ZowPow has launched a line of plush mobile gaming controllers to pair with mobile games. The plush controllers are still in the process of being rolled out but the first in the line is a toy plane that pairs with an EA game called “Tiny Plane.”  The small plush plane has sensors and accelerometers built in to it so that the game can sense which direction the plane controller is facing so that the plane in the game faces the same direction.

Currently ZowPow has two plush controllers available in their online store retailing for around $30 each and they have plans to partner with a number of third party developers to develop plush controllers for their games as well. The company plans to continue working with other parties rather than develop their own games, sharing revenue of each plush controller with the game developers.

The ZowPow platform supports iOS devices including the iPhone 4S and iPhone versions after that, the iPad 3 and later and the iTouch 5. Additionally, the system will connect to TV’s if an AirPlay or HDMI adapter is accessible.