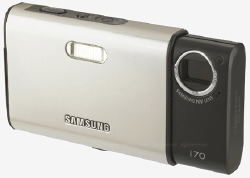 So this product by Samsung is being released alongside of every 99999 other products being released at CES. At first glance it looks like the next iteration of the new digital cameras aimed at kids that are sleek and look cool. Not so. Just take a look here:

So a 3.0 inch LCD sounds pretty nice, huh? Well, so does that MP3 play back feature that they seem to be downplaying. This nice little gadget records videos, takes 7.2 megapixel pictures, and plays your new songs that you downloaded last night. Also included here is the piece of technology called Intelligent Face Recognition. It takes a look at the picture   you are about to take, finds faces, and auto-adjusts focus and other aspects to make the faces look as good as possible. While no tests have been done by third parties on image quality, the i70 sounds pretty nice. — Nik Gomez

Samsung i70 Identity Crisis: PMP or Digital Camera? [via AnythingButiPod]