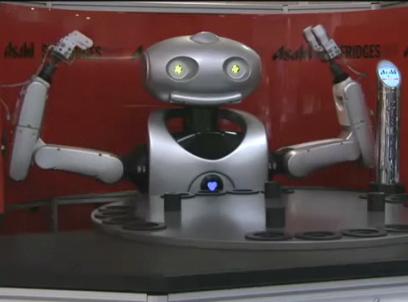 Sooner or later, the cute bartender that was the only reason you ever went out to the bar in the first place, will be replaced. Robot bartenders are the future. No more half-filled plastic cups of Red Bull and vodka that only lead you to getting thrown out after an argument with the bartender regarding a drink that wasn’t made properly. These bots know how to serve and never have a grim attitude.

The Beer Robot from Asahi has many talents such as moving around and serving beer. That’s a lot of talent for a robot. Here’s the best part: robot bartenders don’t get paid on tips. Tipping bartenders was always a bullshit concept anyways. After all, they already overcharge you on all the drinks and don’t give you BJs. It’s a rough world out there.