Real 3-D For Your Viewing Pleasure 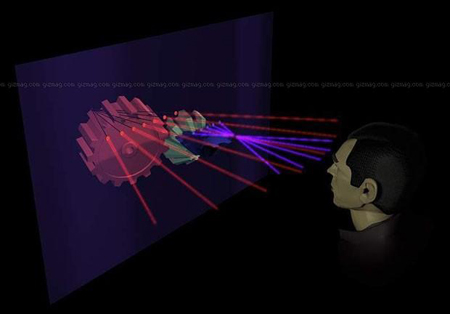 In yesteryear, we’d be playing Rad Racer with those chunky black glasses with the blue and red lenses thinking all along, “Wow this is real 3-D! The cars just jump out at me, man!” However, this is not the case. The company Holografika has created “HoloVizio” technology which provides multiple viewers with a three-dimensional display that changes as people shift their perspective of the screen.

Holografika claims that most of the three-dimensional gizmos on the market are not true 3-D as they do not meet the following criteria:

The HoloVizio does not try to fool the brain into thinking it’s seeing a three-dimensional image, but rather attempts to recreate the properties of a window, a two-dimensional surface that displays shifts in perspective and changes in light pattern. With this technology in your household, watching “Brazil” just got a heck of a lot more interesting.
Link (via)