Rat Brain Robot Is As Evasive As The Real Thing 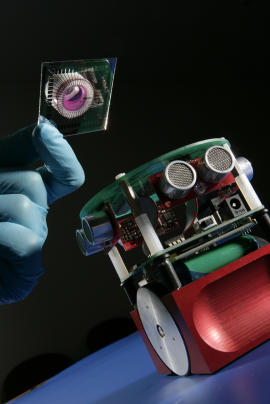 In The Matrix, robots are self-aware of their existence. This is a bad thing as it eventually leads to the enslavement of mankind. The idea of a human brain inside a robot is intriguing for anyone whose ever wanted to put their brain in a robot body to become an Adrian Barbobot. Scientists are getting closer to that vision, having equipped a small robot with rat neurons to control itself.

An interesting trait of the artificial brain is that it can get bored. If it doesn’t receive any information from the electrodes it’s connected to, the neurons will break the connections, likewise, when the neurons are stimulated, more connections are formed. The robot that was built runs on wheels with an ultrasound sensor enabling it to spot when it is approaching a wall and redirect itself accordingly. That’s great and all but could’t you just do that with an Arduino?