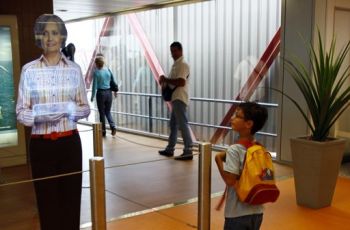 If you’re boarding a flight at the Paris Orly airport, you might be surprised to see that your boarding agent isn’t a real person. No, you’ll be greeted during the boarding process by a “virtual” agent, which takes on the appearance of a 2D hologram.

As soon as you press a button, a life-size holographic image appears. “Bonjour! I invite you to go to your boarding gate. Paris Airports wishes you a bon voyage,” the virtual agent says, as the name of your destination flashes on the screen.

The tech behind these images is actually very simple. A rear projector displays the images on a human silhouette made of plexiglass. The “agents” and all of their dialogue are pre-recorded.

Paris isn’t the first airport to test out these “virtual” boarding agents. Similar experiments are being carried out in Manchester and London.