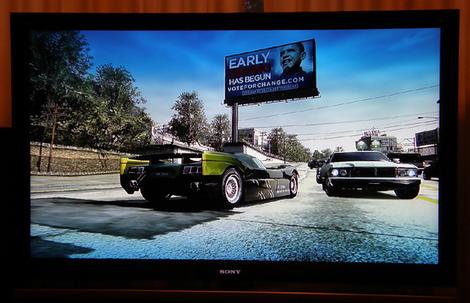 Barack Obama is taking his campaign to the virtual space that is gaming in an attempt to appeal to gamers everywhere. The Obama campaign has purchased space in Madden NFL ’09 and nine other titles from Electronic Arts. Only ten states will be able to see the ads (once updated through Xbox’s Internet service): Colorado, Florida, Iowa, Indiana, Montana, North Carolina, New Mexico, Nevada, Ohio and Wisconsin, which all happen to be swing states.The ads will be running until November 3rd.

Apparently, there aren’t enough advertisements being raped into the eyes of gamers everywhere. So, where’s McCain? I heard through the grapevine that he’ll be throwing his face in all of the games Obama hasn’t, which only leaves the lame leftovers no one will buy. Just don’t quote me on that.