Multicore CPUs Could, Very Soon, Be Damn Near Indestructible 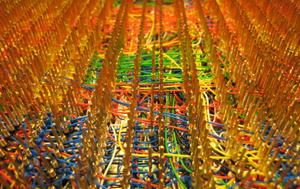 Moore’s Law states that the number of transistors on a computer processor will double roughly once every two years. While you would think that this would have processors growing larger and larger in size, the exact opposite has happened where now CPUs are being made faster, more powerful, more energy efficient and smaller. Of course, with a smaller size comes an added risk of the processor chip being damaged. While this is presently a problem without remedy, a team of four companies and two universities are working to find a solution.

The group is called “CRISP,” or “Cutting-Edge Reconfigurable ICs for Stream Processing,” and they have created a computer chip that, when damaged, will reroute tasks to other parts of the CPU without sacrificing performance. The end result would be expanded life cycles for many consumer electronics that, at present, are more or less DOA once there is a problem with the CPU.

If Intel or AMD were able to make processors that could utilize CRISP’s technology, it could feasibly change the way computers were used, as well as having a significant impact on the world around computing. Cell phones, iPods and the like would no longer need to be replaced if the CPU failed, which could have a significant impact on the world in regards to being more eco-friendly.