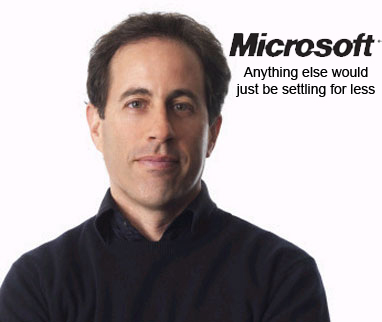 Microsoft no longer wants to sit idly by as Apple’s advertising campaign bashes it, making it look like an old geezer in front of all those hipsters who watch TV. Everything about Microsoft’s $300 million advertising campaign has been quite ‘hush hush’, that is until now.

“They are not seen as cool,” says Robert Passikoff, president of Brand Keys, a New York branding firm. “Apple is cool. Can anyone even recall a Microsoft ad? No.”

So, Microsoft recruited Jerry Seinfeld as their key celebrity pitchmen to tell you that he thinks Apple‘s products just plain stink. Jerry Seinfeld is cool. Therefore, whatever he says or believes, I’ll follow blindly. He’ll appear in several ads with the big man himself, Bill Gates and will receive about $10 million for the work. The ads will debut September 4th and marks it as one of the largest ad campaigns in the company’s history.