It Wasn’t A Bad Dose, Dude! It Really Is The Aurora Borealis In Santa Monica 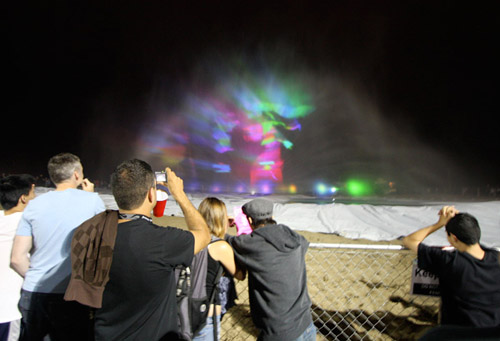 Santa Monica recently held its first GLOW festival on July 19th, an all-night event of media art, performances, music, and sculpture. The most memorable of all was perhaps Usman Haque’s art installation called Primal Source. It looks like a smaller-scale northern lights, being made up of a large water spray screen that projects light patterns aided by the perfect backdrop of a darkened sky.

The coolest and most engaging aspect of the design was Haque’s idea to use microphones around the installation that allowed the crowd to alter the display through their reactions and the noises they were making. The cheers and shouts of the crowd made way for a wickedly impressive light show.