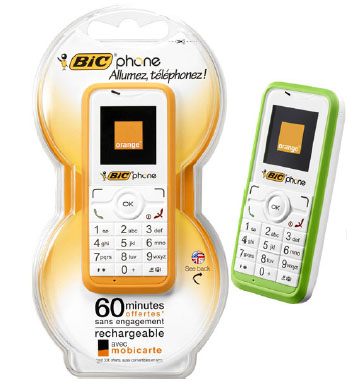 Disposable razors, pens and even lighters just weren’t enough for Bic. No, it had to team up with Orange France to launch the Bic Phone. Due out around August 7th (in France), the Bic Phone will come in two amazing colors: disposable razor orange and Bic lighter green.  With a pre-charged battery and an hour of free calls, why would you want to chuck this cellphone in the trash? For $80, hold on to it, maybe they’ll release some flashy ring tones for it.

“Don’t expect too many features though, because Bic states that the phone’s only designed for making calls and sending text messages.”