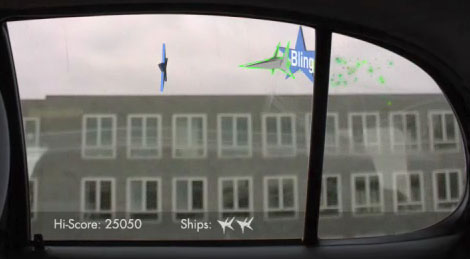 The ultimate gaming rig has now become your car. It doesn’t sport the powerhouse graphics offered by the PlayStation 3 or Xbox 360 nor the gimmicky bullshit that encompasses the Nintendo Wii, but it does have a cool name: the Carcade. Students at the Berlin University of the Arts designed this “augmented reality in-car videogame” which utilizes a laptop and webcam to turn the scenery you’re driving by into the level of the game.

It’s like the standard shooter except it’s all about avoidance rather than racking up points by demolishing enemies. That doesn’t mean it isn’t fun, considering that the faster the driver is going will directly affect the difficulty and speed of the game. Just hope the driver keeps his/her eyes on the road and off the game.