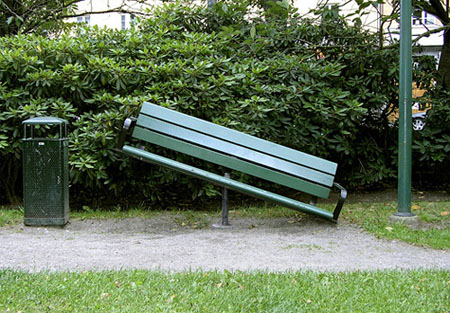 Martin Nicolausson must’ve been bored out of his mind when he came up with the idea of a seesaw bench for a bus stop. Or perhaps he was just tired of standing there all by himself with no one to talk to. His goal: to get strangers to converse in public spaces. It encourages cooperation, requiring two people to work together in order to sit comfortably, unlike the solo act of swinging at the bus stop. What better way to have two strangers strike up a conversation while waiting for a bus. I can imagine it now:

Ah, the beginning of a beautiful friendship. Mission accomplished!