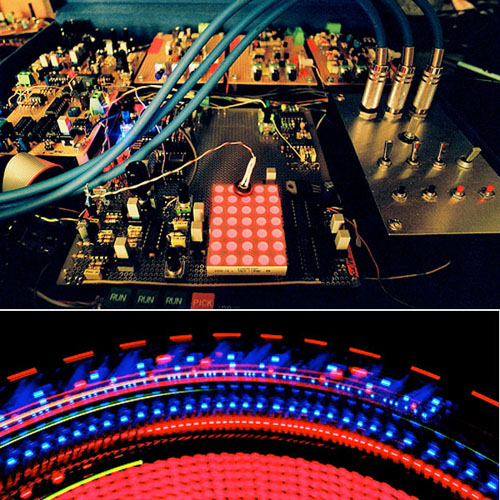 Found on MAKE, this “Big Box o’ Techno” is a box the size “of a medium pizza” that includes two synths, a drum machine and a sequencer. Essentially, it’s all you need to kick out the hot jams. Think it’s simple MIDI and some batteries? Think again.

Everything in the box plays in synchronized rhythm. A whole-note tempo clock input drives it all. This works because its based on phase-locked loop (PLL) technology that multiplies an incoming tempo clock up to faster rhythmic divisions. Its not MIDI, and there are no microcontrollers, Arduinos, yadda yadda. (Does anybody else find the word Arduino annoying?) Someday I’ll figure that stuff out but for now I’m using the good old CD4046 phase-lock loop chip. The chief limitation of this method is that the system takes time to stabilize (lock) when the incoming tempo changes, and the results can be pretty cacophonous as the PLLs hunt for the new tempo… about 30 seconds in the worst case. Its analog technology, folks. Once they stabilize though, it is rock solid.

Oh, and it’ll give you one hell of a light show too.