Why Apple Can Charge $50 for a Thunderbolt Cable 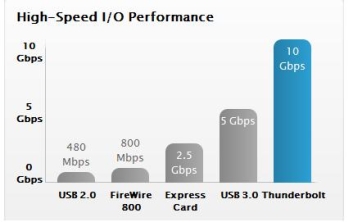 … Because they can. But seriously now — We all know that Apple is king when it comes to proprietary hardware. Computers equipped with Thunderbolt capabilities won’t be able to use Thunderbolt devices unless you drop $50 on a cable — for each device. This includes hard drives, RAIDs and mobile video I/O devices, among many others.

Thunderbolt is fast, right now clocking in at 10GB/s. The cable is apparently specific to Thunderbolt devices, since it includes “custom firmware” built right into the cable to facilitate high speed transmissions. However, right now Apple is the only supplier of these “special” Thunderbolt cables, though both Apple and Intel currently sell Thunderbolt-equipped computers.

Even with Thunderbolt’s benefits, the cost of this cable could cause Thunderbolt to be just as “popular” as Firewire. Even though Thunderbolt has superiority, the high price of the cabling could prevent it from being accessible to all consumers.