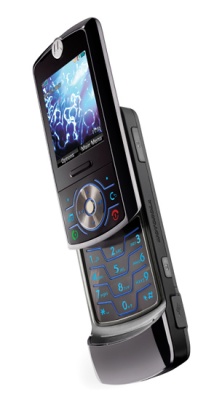 Are you tired of the RAZR design? Hope not, because Motorola is far from done rolling out these new phones that emphasize the RAZR aesthetic. In this case, it’s the motorizr z3 slider handset being updated to the z6. No real design makeovers, but motorola is pushing the media capabilities more than before. Even thought the z6 only has 64MB built in storage, it is upgradable to 2GB of removable storage via an MicroSD card slot. Back to the media aspects, the internet button has been redirected to the media player which can play MP3, AAC, AAC+, EAAC+, AMR NB, and XMF file formats. Probably most revolutionary of all is that the new Linux-based user interface makes its debut here. Anything that ditched the old Motorola UI is a welcome change. The specs on the z6 haven’t changed from the z3, it still has a 2.0 megapixel camera, Bluetooth v2.0 with A2DP, and 262k color TFT LCD screen. The MOTORIZR z6 is expected to be released in the first half of 2007. — Nik Gomez

Tweaked MOTORIZR Z6 launched at CES [Gadgets on the Go]