Three Sixty Table Spins Me Round and Round 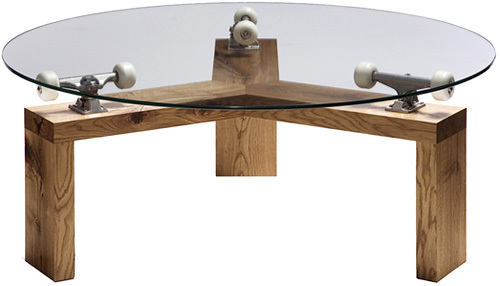 If you give a mouse a cookie, he’s going to want a glass of milk. A similar saying can be said for skateboarders. If you give them parts, they will build some kind of rolling contraption out of it. In this case, the Three Sixty Table resembles a coffee table-sized lazy susan that can turn for serving. The catch? It uses a series of three skateboard trucks and three pairs of wheels to create the movement, all while maintaining a certain amount of class.

Craftsmanship doesn’t come cheap, though. The Three Sixty Table by Studio Mauerer Hendrichs will set you back $1795.