Steve Jobs spotted using the iPhone in the wild 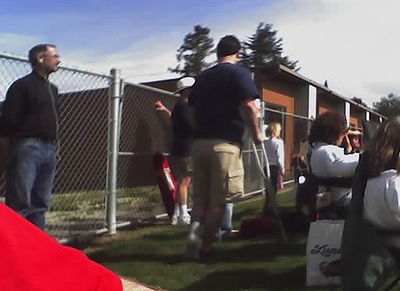 Apple CEO Steve Jobs was spotted in the wild using the still unreleased iPhone. Reports say that Jobs was seen yammering on the phone and listening to music at his kid’s soccer game. Flickr user, Thane, says this about his snapshot:

Yes, the photo is for real, and yes it is an iPhone that he was talking on, or at least it was the same size and shape. He took it out of his pocket to make calls using the touchscreen.

I thought it was interesting, so I took the photo.

I can’t believe this photo has over 1100 views.

Maybe I’ll become a professional paparazzo and save up the $500 to buy one for myself when it’s available.

Very interesting indeed. If he is in fact using the iPhone, this would be the first real spotting of one in everyday use. And who other could be the user, than Steve Jobs? — Andrew Dobrow