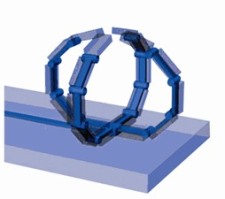 UCLA engineering scientists are developing a microscopic robotic hand, which they hope one day will be used for surgeries that entail removing small bits of crap. The silicon robotic fingers will be controlled by air pressure rather then electricity, which we assume is to assure it lasts longer than a complex electrical device would.

The only drawback for now is that the little guy doesn’t come equipped with a camera, so the use will still be limited. Future models of the robot are planned to have a tiny camera planted somewhere on its base. The tiny silicon fingers are controlled through polymer “muscles” which act as joints between the finger units. Each “muscle” is attached to air pressure which alters the finger location. Also expected for future versions is optical fibers on the fingers. — Andrew Dobrow