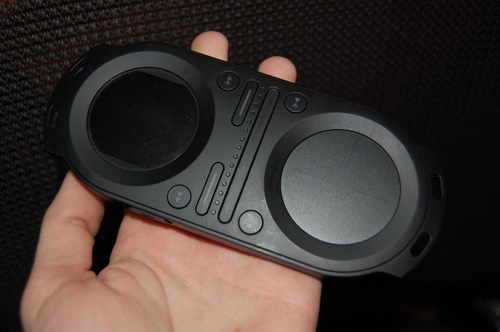 I’ve been DJing since I was 15. Never professionally, only at parties, the occasional event or for my own pleasure. My first set of decks were made up of old Numark belt-driven turntables. After I got a little better, I bought Technics 1200s with Ortofon cartridges and a nice Rane mixer. That lasted me until I went digital and started using M-Audio’s Torq Xponent controller in conjunction with Traktor 3 on my Macbook.

Now it’s 2009. For the last few weeks, I’ve been messing around with the Tonium Pacemaker. It’s a rather expensive little DJ device coming in at around $850 but it packs a lot of power. 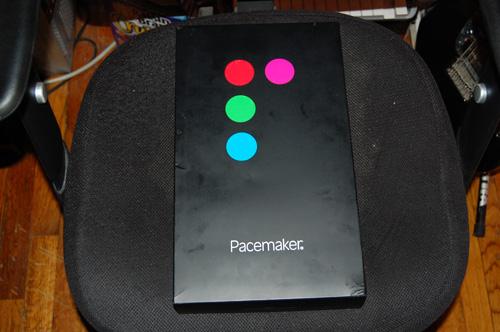 When you unpack the Pacemaker, you’ll get some cables, an AC adapter and a small manual. The one thing about the Pacemaker that I’ll say right off the bat is that it doesn’t come with enough proper documentation in a large enough format to really get you going. You’ll have to essentially learn it through the manual and experimentation, which can be both a good and bad thing. Tonium’s website, Pacemaker.net, features some helpful tips and tricks, but nothing concrete and instantly available for new users.

No matter, though. After spending an hour with the Pacemaker, you’ll be able to pick up the basic features. Here’s a breakdown of how it works: You have your circular display in the center, buttons for cuing up tracks, skipping tracks and play/pause. There two additional buttons that let you switch between Deck 1 and Deck 2 when spinning. A touch sensitive pad and crossfader rounds out the mix, with a thumb slider on the side of the device. I’m not going to get into too much detail here, but you can understand the point. Watch the video I did and you’ll get the hang of it.

The touch pad at the bottom is where you’ll spend most of your time with the Pacemaker. Here, you can adjust your bass, mid, treble and gain, as well as implement effects like reverb, hi-low filter, delay and roll. It’s disappointing that the Pacemaker doesn’t include a flanger at all, as the reverb and roll are a little weak when it comes to getting the crowd pumped. The delay and hi-low pass filter work great, though. 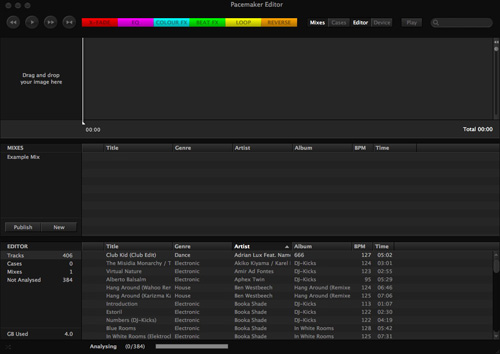 You plug in your headphones at the bottom and there’s a line out for audio. The included AC adapter also plugs in here and thankfully, Tonium made the cord extra long.

Using the included software (I updated mine via Pacemaker.net), you connect the device via USB and load up tracks. I didn’t get a chance to play around with the editing features of the Pacemaker software but it looks fairly easy to use, though not very robust.

So the big question is: How does it work in a live performance?

The first thing you need to keep in mind is that Pacemaker is an alternative to your current setup. This isn’t meant to replace that club setup you have going in your bedroom. That aside, the Pacemaker is nearly flawless. Mixing tracks is very easy and the crossfader is surprisingly responsive and accurate. With the auto-beat matching feature that was recently released as an update, any jackass can get up on stage and mix together some house tracks. Justice and Booka Shade? No problem, my man.

Words can only do the Pacemaker so much justice. It’s a great device and I recommend it to anyone looking for a unique new way to perform live. Unfortunately, the price point is a bit high for most amateur DJs, so be sure to try it out before committing your hard earned cash to it. You may want to look for turntables on sale before you commit to something like this. Watch the video to see how well it works with mixing, etc.