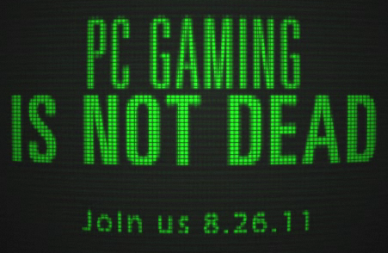 If you listen to the rants of the console fanboys, you’d think that PC gaming was extinct. Of course, any discussion involving the viability of PC vs Console gaming will undoubtedly end in bloodshed.

Razer is a manufacturing company specializing in gaming products primarily used for PC gaming. Now, they’re on a mission to prove that PC gaming isn’t dead — far from it. They’ve launched a slightly ominous website condemning “shoddy console ports” and saying that on August 26th, PC gamers around the world “will unite”. There’s even a stylized green LED countdown clock.

They’ve even taken their marketing campaign one step further, and taken out a full-page advertisement in the Wall Street Journal with a “message” to Xbox, Playstation and the Wii.

I wonder what Razer has planned for August 26th?