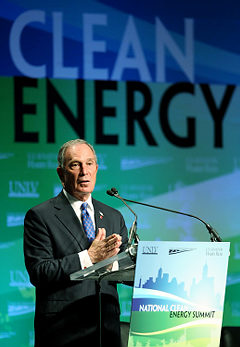 Tuesday night at the National Clean Energy Summit, Mayor Bloomberg of New York City expressed his vision of a cleaner more green New York. He urged the need for energy-efficient design and proposed alternative methods of obtaining power, whether it be by wind or solar means. He goes as far as suggesting to add wind turbines to both the Brooklyn Bridge and Empire State Building, a move that would dramatically change the NYC skyline.

But with good intentions, Bloomberg hopes to cut greenhouse gas emissions in the city by 30% before 2030 making New York the cleanest air of any large American city.  Our hats are off to you Mr. Bloomberg, we wish more leaders cared about our well-being as much as you do.