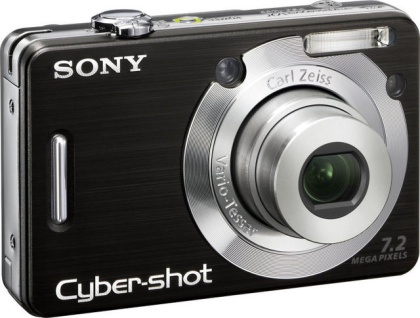 Sony cameras have had quite strong reactions from techies everywhere. As with many other Sony products, the proprietary MemoryStick is Sony’s media card of choice. Sony has released a new line of low to mid range cameras that range in price of $150-$200, a 7 megapixel sensor is quite a nice feature for that price. Coupled with the large LCDs that Sony puts on the back of their cameras (2 inch), these cameras seem pretty tempting. Another little fact about these cameras is that they take AA batteries instead of a proprietary battery as many manufacturers are switching to now. So the full line of cameras includes the S650, S700, W35, and W55. The W series takes the proprietary lithium ion batteries. Also, for you kids (or for you), the cameras come in multi-colored body styles. So whether you are looking for a new camera or not, newer and cheaper cameras are always nice. — Nik Gomez