NASA Mulling Over a Laser to Blast Space Debris 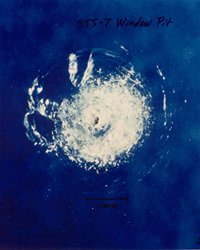 In our 50-plus years of space exploration, we’ve left a fair share of crap in space. Satellites, equipment, booster rockets and other, more “organic” (read: people garbage) debris can lead to a huge problem for space-faring crafts. Don’t believe me? The damage in the picture posted to the left of this text was caused by a fleck of chipped paint that impacted the front window of the Space Shuttle Challenger.

Suffice to say, these pieces of space junk can lead to problems. Thankfully NASA has a plan — and it involves lasers.

Actually, it’s just one laser and as of right now it’s still in the development phases. Another disappointing factoid about the laser is that it wouldn’t actually destroy the space debris. Instead the laser, which would be powered at 5kW, would slow the trajectory of the junk so that gravity can grab hold of it and… well, do its thing.

For those of you who think that space is entirely too big for any kind of serious collision threat, know that there are tens of millions of pieces of debris, most of which is no bigger than the aforementioned paint chip. But of the objects large enough to cause serious damage, 60% of them come from two sources: the Chinese, who are launching satellites to try and counter/prevent Star Wars, and the collision of Iridium 22 and Cosmos 2251, two satellites that collided in 2009.

It goes without saying that preventing any large object from crashing into either the International Space Station or a future shuttle/rocket launch at 26,000+ MPH is a good thing. Besides, if NASA gets lost, they can take a page from the Navy.