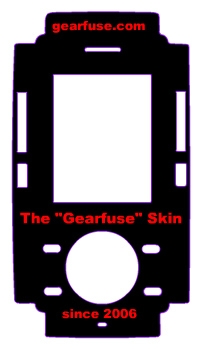 Only days ago on Christmas Day, millions of people were introduced to new personal electronics, many of which fall under one of the “Big 10” which includes the Nintendo Wii, Sony PS3 and PSP, ipod Nano, Blackberry, Treo, DELL Notebook Laptop, Motorola and Palm. With the millions of hands now playing with their gadgets, there are millions of people eager to stand out from the crowd by making their gear a little more reflective of their personality. MyTego introduces the water-proof, easy on and off, adhesive skin for electronics. The TEGO skins are fully customizable with any photo, text, or graphic that you want. The Gearfuse LG Chocolate skin (as seen above) is a nice, but totally lazily put together example. Customers can also pick and choose from MyTego’s massive collection of photos. Prices vary between $12 (for a Palm-style phone, 1 face)  and $41 (for a PDA, 4 faces)  depending on what device you are designing the skin for. — Andrew Dobrow