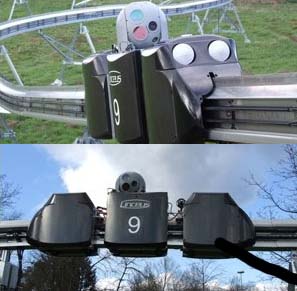 Israeli company Linceus is introducing a monorail robot designed to patrol large areas such as airport perimeters/Gaza Strip without the need to hire rent-a-cops for security. The bot is capable of reaching speeds up to 50 MPH.  It’s equipped with an array of sensors such as thermal cameras, laser designators and a rangefinder.

It’s a damn shame it doesn’t have an arsenal of killer weapons but it does feature some nonlethal alternatives: a high powered spotlight, loud sirens and other gadgets to spook would-be vandals.  If only Disneyworld had one of these when I took a shit on the Epcot Monorail.