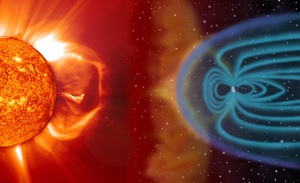 NASA’s MESSENGER satellite recently began to transmit back to Earth the first ever images of Mercury taken from orbit. They’re a stunning sight to behold and if you haven’t had the chance to take a peek at them, I suggest you do. Especially since the images that MESSENGER sent back to us were dangerously close to being the only images we would’ve gotten from the probe.

You see, recently there was a solar storm near Mercury. Solar storms are known to most Earth-bound folk as being the cause of the aurora Borealis or “Northern Lights.” Being as far from the sun as we are, when solar storms reach us they’re usually weakened to where they pose very little risk. But when you’re Mercury, and you are between 29 and 44 million miles from the Sun (for comparison, Earth is 93 million miles from the Sun), a solar storm can seriously interrupt your weekend plans.

Had the coronal mass ejection struck Mercury and the MESSENGER probe, there could have been temporary or even permanent disruption of signal between the probe and NASA. Luckily both the planet and the satellite made it through unscathed.