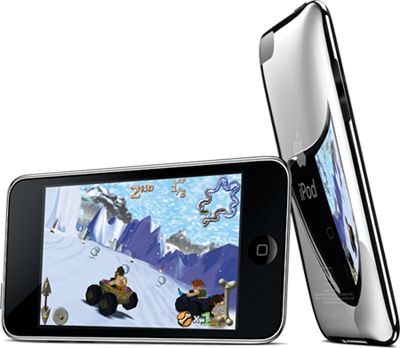 Every once and awhile, Steve Jobs must prove to everyone he’s still functioning on a coherent level. That’s why whenever he opens his mouth, time stands still and everyone on the planet lends an ear.  The Apple chief executive announced today that the new iPod Touch is, “the funnest iPod we’ve ever created.” But, what’s it packing?

For starters, it’s smaller and lighter than the original and it’s new design makes it more comfortable to hold. It includes iPod firmware 2.1 that enables it to work with the new iTunes 8 Genius feature used for creating playlists with the touch of a button.  On top of that, the App Store is providing over 700 game titles that are available for download and playable on the iPod Touch.

For those who can’t get enough of the gym, each new iPod touch features built-in Nike+ iPod support that, along with the $20 Nike+ sensor that you place in your shoe, can track miles run or sync with the latest generation gym equipment.