Like Batman, You Too Can Stop Bullets — With a Clipboard 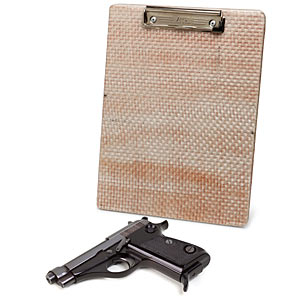 It’s no secret that ThinkGeek has some pretty amazing gadgets for sale. Aside from their selection of marshmallow guns, USB egg fryers and other completely useless (but awesome) stuff, you can now apparently purchase a clipboard that has the power to stop bullets.

Why? Because, stopping bullets is badass. Owning a clipboard that has the same protection power as Level II body armor is just awesome in itself. As ThinkGeek puts it:

So, in the event that you want to brag to your friends that you can stop a 9mm bullet with the power of a paper-holding, completely functional clipboard, you can own it for around $45. Obviously, this is a small price to pay for being able to protect yourself from being shot by a disgruntled former co-worker.