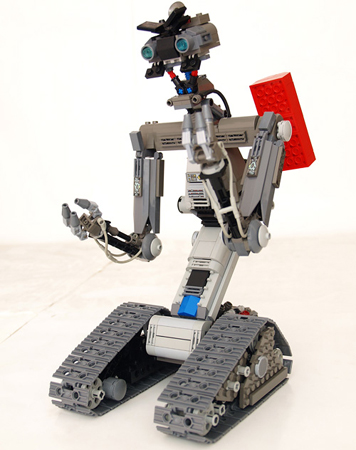 Anyone who grew up in the ’80s remembers Johnny Five of Short Circuit. The perfect killing machine with absolutely no desire to kill after having disbanded its deadly laser beam weaponry in favor of a pocket knife. Yea, Johnny Five’s a robo-boy scout but his redeeming quality is his vast knowledge of pop-culture. As tribute to the friendliest librarian robot around, Brickshelf user rack911 has constructed a Johnny Five model out of LEGOs and other compatible bricks.

“It’s the all-new Johnny Five! Just look at these items! Increased memory: five hundred megabytes on-line! I come with a utility pack and dozens of gadgets for outdoor living, lots of Greenpeace stickers, and even my own Nike swoosh! And, if you act now, I’ll throw in, absolutely free, my all-new, multi-frequency remote control!”