Janitor robot is tired of you messy humans 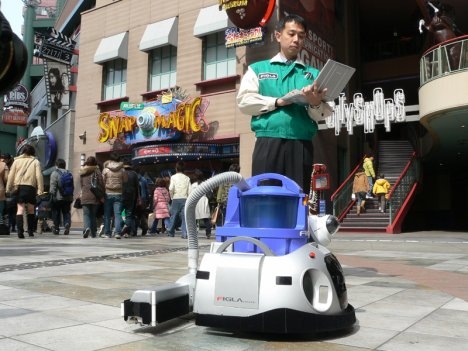 There are three different types of janitors. There are the ones that seem to be constantly grumpy and growl obscenities under their breath, the eccentric ones with a heart of gold, and now there is this nameless robotic janitor, simply called a Multipurpose Network Service Robot. The robot janitor is no everyday dust vacuum. It also comes equipped with a video camera, WiFi, and the ability to apologize for interfering or running over someone’s feet.

Created by Figla, this Japanese cleaning machine is currently on display in Osaka as a feature of the Robot Laboratory project. Using infrared, gyroscopes, bumper sensors, and ultrasonics, the robot janitor can maneuver into tight spaces without being too much of a nuisance. Using its WiFi technology and camera, the robot streams a video feed to a control center to monitor its progress. This robot is expected to be commercialized some time next year at the going rate of ¥1 million ($8,500). — Andrew Dobrow

Link (translated from Japanese) [via]