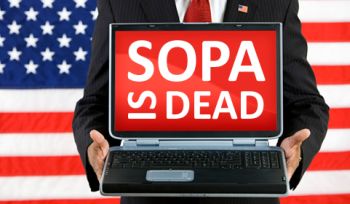 Two months ago, we posted about “SOPA” (the Stop Online Piracy Act) and how it could potentially destroy the internet we love. Today, after a huge amount of backlash from the online community, we have great news — SOPA is dead. Lamar Smith, the chief sponsor of SOPA, has officially pulled the bill.

While this is great news for the internet, don’t celebrate just yet. This bill keeps being re-introduced in different forms (remember the “PROTECT IP” act?), which means legislators may pass a version of SOPA in the future.

The main problem with these regulatory acts is that they often include vague language which could allow for censoring of lawful websites without much red tape. Could you imagine the internet without YouTube, or Vimeo, or WordPress?