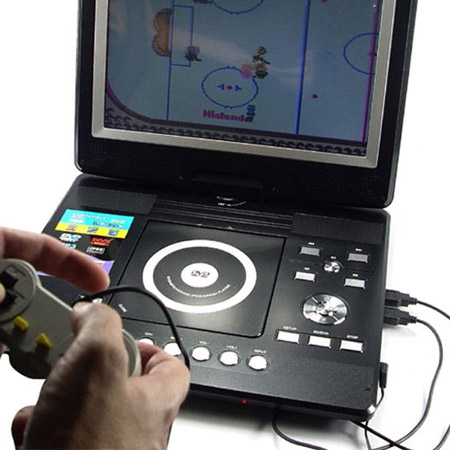 This portable entertainment center is the only one in existence advertised with the Ice Hockey game for the NES playing on it. Despite all the expected features of a portable DVD player like a 14-inch crystal clear TFT LCD screen, multi-format disc play (including MP3 and DivX) and a high quality TV tuner for use all over the world; this DVD player is packing more than meets the eye. Again, why else would they advertise Ice Hockey for the NES on it?

That’s because this thing comes stocked with an 8-bit NES emulator. It could have been advertised with any game on the NES, but they chose Ice Hockey. Um, where’s Blades of Steel? For $246.25, it’s the most expensive emulator you ever payed money for. Oh right, it also plays DVDs.