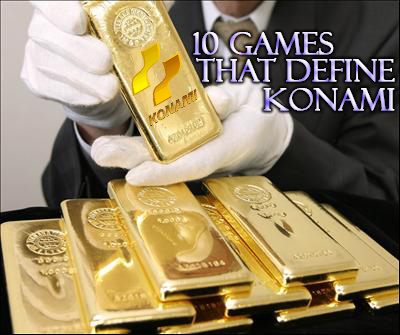 We’ve selected an assortment of Konami titles we feel are classics and define Konami along with subsidiary companies such as Ultra Games. Some titles didn’t make the cut and that’s a damn shame but Konami doesn’t fuck around and neither do I. Hit the jump to dive into the ten. 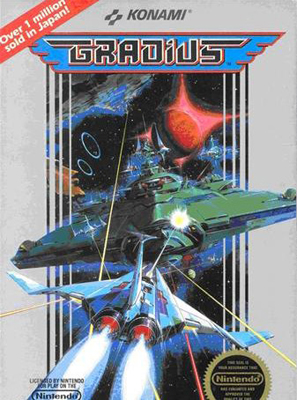 Regrettably, Time Pilot did not make the list as one the defining games of Konami despite its success. However, the horizontally-scrolling shooter Gradius is a noteworthy series which has spawned many sequels. Drawing inspiration from Konami’s first shoot-em-up, Scramble, Gradius only improves upon gameplay mechanics by ditching the need to refuel your ship as well as adding a wider variety of stages. The Vic Viper is a tight ship anyone would want in their galactic space garage but is it tighter than the Raiden Supersonic Attack Fighter? You be the judge. Gradius soars its way into the Konami Hall of Fame along with Salamander/Life Force. 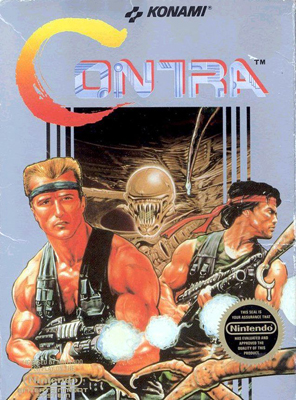 The game that lives on in all of our hearts as being one tough fucking game. The cover of the box had Schwarzenegger and Stallone lookalikes. It’s as if the original Predator and First Blood films had sex; Contra would be their freaky steroid ridden man-child. Let’s just pretend every Contra title from Playstation and beyond were never created (minus Contra 4 for the DS, which ruled). This game goes down as the manliest game of all time (right up there with Timber the arcade game), firmly listing its place as a defining title of Konami. 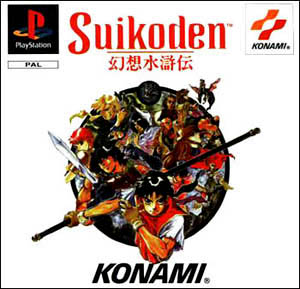 What a great series but can anyone pronounce the title correctly? I doubt I can even pronounce this game correctly. I digress to the main reason why this game is so remarkable: tons of playable characters. It had your typical RPG storyline but the game play was unique it’s own way. Though it has a standard combat system found in many typical RPGs, I’ve always thought of it as comparable to Shining Force and Ogre Battle for some of it’s combat schemes. It’s more fun than Azure Dreams and that says something. Suikoden’s war campaigns and one on one duels were nothing more than a simple game of rock, paper, scissors; but it worked! It’s a fun RPG with the most dynamic cast of any game since Live A Live. A great RPG and great series which puts another notch on Konami’s belt. 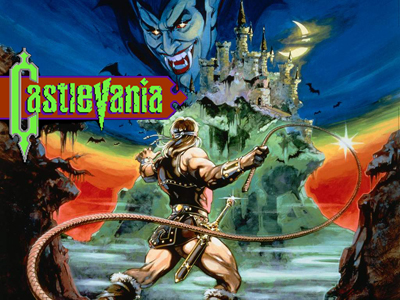 I always thought of Castlevania as a Metroid-like game for goth kids. That’s not an insult; Castlevania is an amazing series of games (not counting some of those lesser installments not worth mentioning.) The only thing I can think of that’s cooler than hunting Dracula would be spraying bullets at waves of aliens with a pulse rifle a la Contra. Though Vince is a diehard fan of Symphony of the Night (because he’s gay for Alucard), I got back into the game with one of the later installments, Portait of Ruin. Sure, the game hasn’t really evolved too much since its origin but it doesn’t need to, it’s kicks ass just the way it is. I only wish they didn’t recycle so many damned enemies. Regardless, the game has a ridiculously hardcore fanbase and as such is firmly rooted in the bloodline of Konami’s classics. 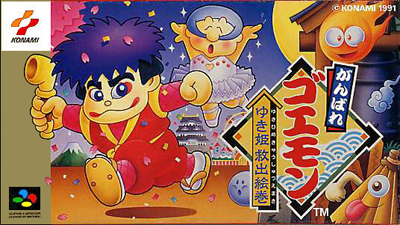 Despite not being well known in the states (only four games were released here), Goemon’s antics are popular in Japan. The series consists of a diverse amount of genres including RPGs, platformers and board games. Most notably is the Legend of the Mystical Ninja for the Super Nintendo. An action-adventure for up to two players with an assortment of mini-games in between the platformer and exploration elements. Its successor was Mystical Ninja: Starring Goemon for the Nintendo 64 which was fairly well received and a personal favorite of mine. Goemon is a profoundly unique character that is easily likeable. The guy fights with a smoking pipe – nuff’ said. 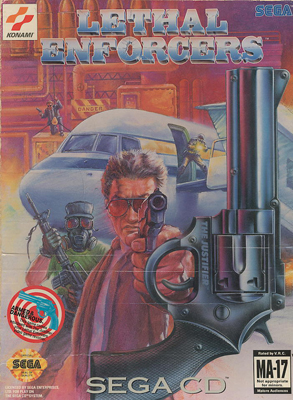 Betcha’ didn’t guess this one was on the list. An arcade game that has you shooting enemies with a revolver while they try to disembowel you old fashioned style. The graphics of this game appeared so real it was frightening. Shit, if you played it like you were Dirty Harry, nothing mattered. This game is one shot one kill, if you can’t handle that, don’t put a quarter in the fuckin’ machine. This isn’t Time Crisis, there’s no foot pedal to provide cover. You’re Don Marshall, you’re a lethal enforcer of the law; don’t shoot innocents, slaughter everyone else. Lethal Enforcer‘s straight forwardness blows many other light gun shooters away and is a Konami classic.

Editor’s Note: If I had known Ryan was including this piece-of-shit in here, I would have shoved a light gun right up his ass. 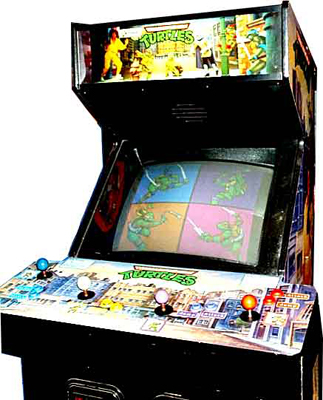 Everyone remembers the Teenage Mutant Ninja Turtles video games. No, I’m not talking about that lousy excuse for of a game on the NES; I’m talking about the beat-em up games in the arcade. Later ported to the NES as Teenage Mutant Ninja Turtles II: The Arcade Game, the game had many successful sequels of the same variation including The Manhattan Project and Turtles in Time. The gameplay didn’t offer any more than other games of similar stature such as Double Dragon, but no one gives a fuck about two white guys named Billy and Jimmy Lee pretending to know kung-fu and enacting revenge on the streets of New York City.

No, we like Leonardo, Donatello, Michelangelo and Raphael, real ninjas trained in the arts of Ninjitsu indirectly by their master’s mentor Hamato Yoshi, oh and the fact that they’re turtles helps too. This game paved the way for some of the greatest beat-em ups in existence of arcade such as The Simpons and X-men (both made by Konami). The turtles series is a foundation of Konami and a defining creation which proves Konami’s greatness even in the light of worthy competitors. 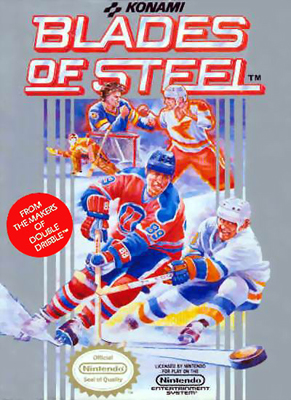 That’s right, Blades of FUCKING Steel. Not even the great one, Wayne Gretzky, could deny this game’s splendor. Everything about this game is no joke and I feel bad if you were one of those kids stuck playing Ice Hockey instead of this one (great game, but no Blades of Steel). One of the most intense hockey games in existence that proves fighting in today’s latest hockey games has done nothing but de-evolved into single button mashing brouhaha. If Terry Sawchuk were alive today, he’d have one thing to say about this game: “FIGHT!” I can’t believe this game was made by the same people who made Double Dribble. Blades of Steel is proof that Konami has what it takes to make a mean sports title. What I’m trying to say is that no hockey game will ever come close to matching what Blades of Steel has to offer.

I’ll never forget the first time I beat this game. Sir Richard Rose says,”I say…bit o’ bad luck…” I respond with “Yeah, bad luck ’cause I got a roll of quarters you fucking Brit.” But my favorite moment from Sunset Riders had to be the end of the second level’s boss. Kick ass music then all you hear is “Draw, pilgrim!”. This game was madness. Bounty hunting out in the old west as a Mexican in a pink poncho is totally worth a quarter. After all, you do collect a hefty bounty after each level’s boss. You can’t spend the bounty you earn, though. There’s no time to, what with the amount of people you kill back-to-back in this game. Sunset Riders is a spur on the riding boots of Konami’s legacy. 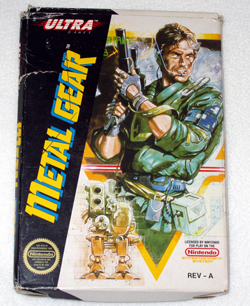 The so-called “father of the stealth genre” is perhaps the most noteworthy of all of Konami’s games. With Metal Gear Solid 4: Guns of the Patriots having just been released, the Metal Gear series is still going strong. Through playing the original Metal Gear, you’d never know that a few years down the line with the release of Metal Gear Solid 2: Sons of Liberty, the contrived plot boils into a conundrum that would probably make for a better movie than game. Well, despite cut scenes around every corner in the later installments, the undeniable greatness of Metal Gear Solid for the PSone is hands down the most solidifying factor of this series’ greatness. Now if only we could get some more MGS: Acid.