i-Tab: For The Forgetful Guitarist 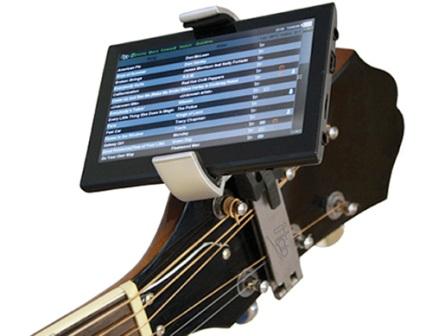 There’s nothing quite like the embarrassment of being on stage, in front of tens of people, and just going blank. Oh crap, what chord do I play next? Do I stop playing or just improvise? i-Tab seeks to stop the forgetful guitarist in his or her absentminded tracks, displaying a constant stream of lyrics, chords and tabs as you play along with your band.

The i-Tab Store offers compatibility with 5000 different songs to choose from, with 500 songs being added every week. With that sort of arsenal you should be fully prepared to perform a killer cover set. Even cooler, the i-Tab automatically adjusts to the chord you’re playing, so if your band isn’t exactly a group of timing wizards, no worries, i-Tab’s got you covered. And it attaches right to the guitar’s headstock for easy visibility. Shipping in April, order yours for $199. No word on whether they’ll make a version for the playable guitar t-shirt.