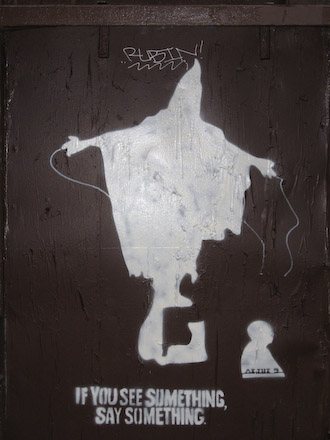 Awwww! Looks like one of the graffiti babies in NYC got disgruntled and pissed off about the constant police state of the city. Way to be original, man! That Abu Ghraib stencil and cheesy line of text you stole from the MTA are about as original as teabagging a dude in Halo 3. We get it. Abu Ghraib was a fuck up (albeit a quite hilarious one!) and the MTA searches your bag every once in awhile. As Arnold would say, “Stop whining!”