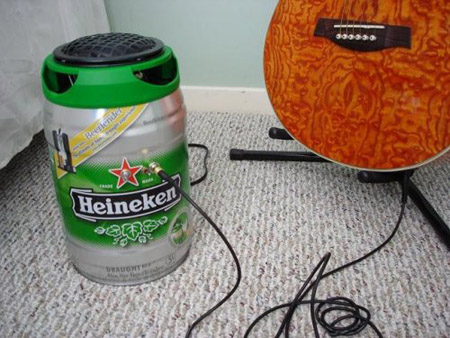 Just because you killed off your Heineken mini-keg all doesn’t mean the fun has to end there. Why not make use of it by turning the keg into a guitar amplifier? eBay seller k_hessler  puts these amplifiers together (whilst under the influence) so he can sell them on the Internet for $119.99.

There’s nothing specifically noteworthy about this 20W amp, I mean – it doesn’t even double as a bong. At least it’s made well, unlike many other DIY amplifiers out there which lack a power switch and volume control. For your own safety, keep the beer amp away from the beercuzi.  Water and amplifiers don’t mix. However, beer and amplifiers do.